Inspired by the Protect Kaho`olawe `Ohana

Inspired by journeys to Kaho`olawe-Kanaloa with the Protect Kaho`olawe ʻOhana...

Our Executive Director, Sandy Ward, was a teacher at Mililani High School from 1994-2019 and during that time she was blessed to take 9 groups of her students to Kaho`olawe-Kanaloa...to learn, work, and be inspired.  Perseverance, hana, pono, kilo, mo`olelo, kūkākūkā, laulima, ha`aha`a...and as George Helm famously advised "do your homework" - were lessons learned from the inspirational leaders and kua of the Protect Kaho`olawe `Ohana.

Standing up for what you know is right without fear, taking the lessons learned on Kaho`olawe-Kanaloa and working in your own backyard, realizing how much there is still to learn, learning from your haumana, facing physical challenges, and most importantly, understanding the power of ʻohana to create change...these too are lessons we continue to honor and pursue.

We believe the lessons learned on huaka`i to Kaho`olawe/Kanaloa - and from the Protect Kaho`olawe ʻOhana (PKO) - serve Hui o Ho`ohonua well as we seek to address the perpetuation of historical trauma to the lands, waters and people of the ʻEwa Moku of O`ahu, including Pu`uloa.

Mahalo nui loa to all who share this journey, who continue to patiently teach us, who believe, and who do the work....you inspire our Mālama Pu`uloa Program and our Hui Alaloa Project.  Eō!

On huaka`i to Kaho`olawe, our Executive Director was blessed to spend time and learn from Uncle Emmett.  On one of those huaka`i, Uncle Emmett advised to "take what youʻve learned on Kanaloa and work in your own backyard...in your own ahupua`a".  We want his ʻohana and our hui to know that his words, his leadership in the PKO, and his life continue to guide as we work to Mālama Pu`uloa and address the historical trauma to lands, waters and people of the `Ewa Moku. 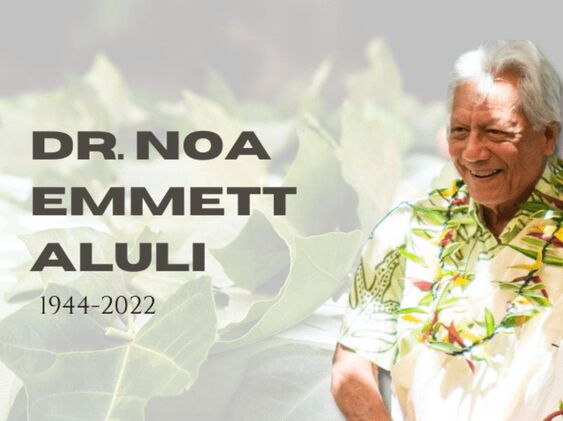 ​In Memoriam: Dr. Noa Emmett Aluli
From the John Burns School of Medicine (JABSOM)
December 1st, 2022
​
The Aluli ʻohana statement: “He pioneered a distinctively Native Hawaiian approach to health care in rural Hawaiian communities that he modeled for medical students who shadowed him. He believed that each patient’s health and well-being needed to be understood in the context of their ʻohana, their genealogy, their lifestyle, and their ʻāina. He shared the philosophy that “The health of the land is the health of the people, is the health of the nation.” He leaves a big gap in health care for the island of Molokaʻi that can hopefully be filled from among those he mentored.”

It’s not an exaggeration to say that Dr. Noa Emmett Aluli shaped the Hawaiʻi we live in today. Before delving into his dedication to rural health, Dr. Aluli may be remembered most for getting the U.S. Navy to cease bombing Kahoʻolawe.
1975 was a pivotal year for Dr. Aluli. He was one of five Native Hawaiians who were part of the first class of graduates from the four-year pilot program at the University of Hawaiʻi medical school (not yet named for John A. Burns.)
In December 1975, Aluli worked with the ALOHA Organization, Aboriginal Lands of Hawaiian Ancestry, and decided to occupy Kahoʻolawe.

Dr. Aluli and Dr. Davianna McGregor, Aluli’s life partner, did an interview with Hawaiʻi Public Radio in February 2022. She said after an ALOHA-sponsored bill to recognize Native Hawaiians’ rights failed to get traction, the decision to occupy federal land was a last-ditch effort to draw national attention to the conditions of Native Hawaiians.

On January 3, 1976, about 100 people from all over the Hawaiian Islands planned to descend on Kahoʻolawe. As McGregor told HPR, someone leaked the information, and the Coast Guard was called. Most of the people and boats that gathered started to disperse, but according to McGregor, only one boat, carrying nine people, made it to the shore of Kahoʻolawe. These would be known as the “Kahoʻolawe Nine.” Dr. Aluli was one of them. He and another man, Walter Ritte, were the only ones who stayed for two days to survey the island.

Dr. Aluli told HPR, “what Walter and I saw was the devastation of an island, of the land, of the ocean. All the bays were muddy, like bloody, muddy. You couldn’t see any clean water around the island.”
During his two days of surveying the damage, Aluli told HPR that bomb craters and unexploded devices were everywhere while tens of thousands of goats kept any vegetation from growing.

“So that just started the movement, ‘Hey, we gotta stop the bombing.’ We were there for Aloha ‘Āina. Aloha ‘Āina was the reason for the ending of the bombing,” Aluli told HPR. Dr. Martina Kamaka, M.D. from JABSOM’s Department of Native Hawaiian Health said Aluli liked to joke that he was almost kicked out of his internship because of his involvement with Kahoʻolawe.

In addition to court action, it would take a series of occupations on Kahoʻolawe for the United States to cease bombing in 1990. In 2003, the island was transferred to the state of Hawaiʻi. While Dr. Aluli played a pivotal role in getting the Navy to stop the bombing, he played a key role in rehabilitating Kahoʻolawe from the damage left behind by the military explosives through his work with the Protect Kahoʻolawe Ohana and the KIRC (Kahoʻolawe Island Reserve Commission)..
“The continued restoration, healing, and malama of Kahoʻolawe today is owed to Dr. Aluli,” said Keaweʻaimoku Kaholokula, PhD, and Chair of the Department of Native Hawaiian Health at the John A. Burns School of Medicine. “It is one of if not the most significant and successful acts of reclamation in our history after the unlawful overthrow of Queen Liliʻuokalani. I cannot overstate the importance of this event on the psyche and mauli ola of our Lahui. It empowered his generation and all generations of Hawaiians since to stand up against unjust acts and desecration of our natural and cultural resources.”
Dr. Aluli was a true defender of Hawaiʻi, and throughout his life, he’d continue to fight for Hawaiians by calling on his medical background from JABSOM.

True to JABSOM’s current mission, Dr. Aluli was determined to serve all of Hawaiʻi, including the most rural areas. He was always a trailblazer, completing his residency on Molokaʻi and later creating the Molokaʻi Family Health Center and Clinic. There would be times when he’d be the only physician on the island.

He is a co-founder of Nā Puʻuwai, the Native Hawaiian Health Care System that serves the islands of Molokaʻi and Lānaʻi. To this day, both facilities serve a large population of Native Hawaiians.

For several years, Dr. Aluli served as medical director of Molokaʻi General Hospital. Much of his research took place on Molokaʻi, including the first Native Hawaiian heart study, Nā Puʻuwai which engaged more than 300 Molokaʻi Hawaiian homesteaders More recently, he was a co-Principal Investigator of Hua Kanawao Ka Liko – A Generational Study of Heart Health among the Hawaiians on Molokaʻi, a community based participatory research initiative. These studies were critical to highlighting the devastating cardiac health disparities of Native Hawaiians. The Molokaʻi Diet study, Hoʻokē ʻAi, was another seminal work that demonstrated the superiority of a traditional Hawaiian diet over modern Western diets, especially high-fat, high-carbohydrate diets.

Dr. Aluli was passionate about advocacy and was always politically active. He believed that Native Hawaiians, in order to have a voice, needed a seat “at the table.” He served on numerous task forces, most recently serving as a member of the 2nd Congressional District’s Native Hawaiian Health Task Force. He helped draft the Native Hawaiian Health Care Improvement Act that was signed into law in 1988 to promote health and disease prevention services to improve the health status of Native Hawaiians.

Rep. Kai Kahele said Dr. Aluli’s significant contributions helped to set federal legislative priorities and policies to advance Native Hawaiian Healthcare. “Uncle Emmett leaves an indelible mark on the hearts and minds of the people of Hawaiʻi, especially those lives he generously touched on Molokaʻi. His imprint and contributions will be felt for generations. He will be greatly missed.”

Dr. Kamaka, who served recently with Dr. Aluli on the board of the Ahahui o na Kauka explains that his passion for improving Native Hawaiian health extended in many different directions as an advocate, networker and teacher. He advocated strongly for increasing the number of Native Hawaiian physicians as well as rural physicians to help serve our community. He was a popular teacher for medical students and he preceptored and mentored numerous local and international premedical and medical students. He founded ʻAhahui o nā Kauka (Association of Native Hawaiian Physicians) along with the late Dr. Kekuni Blaisdell and the late Dr. Clayton Chong as a way to create a strong network of Native Hawaiian kauka (physicians) that could make a difference for their people. He worked with many traditional healers thus demonstrating the power of utilizing the best of western and traditional medicine. His passion for improving Indigenous health extended nationally and internationally where he maintained a large network of Indigenous health care providers and healers devoted to improving Indigenous health.

Dr. Kaholokula said Dr. Aluli would be remembered for his significant contributions to Native Hawaiian health; the protection of our ʻāina and other cultural and natural resources; to political self-determination, and to the island of Molokaʻi. “This is the legacy of Dr. Aluli,” Kaholokula said. “He koa, he kauka, he kanaka — a warrior, a healer, and a servant to our community.”
Please take a moment to listen to the HPR interview: https://www.hawaiipublicradio.org/arts-culture/2022-02-18/navy-bombs-and-the-rescue-of-kahoolawe-in-the-1970s
​
In this excerpt from a 1999 issue of Hawaiʻi Medical Journal, Dr. Aluli provides a fascinating look at how he was able to juggle being a medical student while also serving as a key member of a group of nine who defended Kahoʻolawe. He pays respects to Dr. Thomas J. Whelan who played a pivotal role in making it happen.
Matthew Campbell, Director of Communications
Watch and listen to Davianna McGregor, as Moloka`i welcomes Uncle Emmett home aboard the Hokule`a...
click here for link to view the video posted on social media by Akaku Moloka`i
Support Us